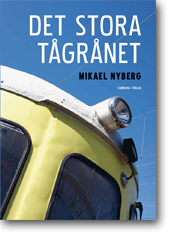 Home page of Mikael Nyberg, a Swedish free-lance journalist and one of the editors of the independent socialist magazine Clarté.

The title of my latest book is Det stora tågrånet (The Great Train Robbery), published in 2011. It is not a detective story, but it deals with a crime – the rollback of more than a century of social progress in the advanced capitalist countries. After the Second World War Sweden was famous for its social engineering and its welfare state. The new Swedish model is demolishing welfare capitalism and social planning as fast as possible. The European Union has dictated reforms of the railways. These reforms are following the tracks of Swedish governments, going back from public ownership and national co-ordination to the 19th century chaos of the market. EU-leaders are enthusiastic about the Swedish reforms, but the whole experiment has been a major failure. The de-regulated railway system can hardly handle snowfall anymore, trains are late, passengers have to wait for hours on wrecked trains, toilets are filthy or out of order, and working conditions have worsened significantly. That is the theme of this book. I also analyze the connection between the crisis of public infrastructure and the pyramid games of finance capitalism. The book has not been published in English, but here is a short speech at the SEV-union congress in Bern, Switzerland, May 2017, which will give you a glimpse of the content. 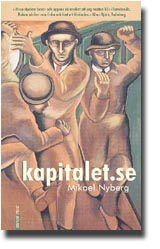 In March 2001 I published a major study on the myth of post-industrial society, kapitalet.se. The book starts with an analysis of the shift in Western bourgeois ideology away from the earlier belief in social engineering, scientific management, technology, reason and human progress. Post-modern theories, New Age-thinking and new management cults grew out of the crisis of the capitalist system in the 60’s and 70’s and the following re-organization of bourgeois power in the 80’s and 90’s. The bourgeoisie has returned to the dark, anti-democratic tradition of the early 20th century.

In the last part of the book I turn to the present relations of production. My main point is that we are not leaving industrial capitalism. On the contrary, the so-called lean production system, now being introduced, is actually an intensification of capitalist industrialization. With just-in-time supplies and planned undermanning – the management-by-stress model of Japanese car industry – the compulsion of the assembly line is stretched out, leaving the single factory to encompass the whole process of production from suppliers of components to dealers.

This system of production, introduced also in service industries, is not a product of computers and other high-tech instruments. It was introduced in Japan in the 1950’s, while there were hardly any computers or robots in use in manufacturing industry. The most important condition was – and still is – a pacified and fragmented working class.

I also show how the European Union is an instrument for large corporations in Europe, freeing state power from national democracry and earlier concessions to popular demands. Kapitalet.se is only available in Swedish and Danish.

An earlier book of mine, a report on large corporations and the environment, The Green Capitalists, was published in English by Friends of the Earth Sweden (1998). I quote from the cover:

”They call themselves green capitalists. Many of the biggest corporations in the world – oil companies, motor industries and chemical plants – are now marketing themselves as friends of nature and invite the environmental movement for disussion.

How green are the green capitalists?

Mikael Nyberg examines the politics of transnational corporations since the alarm of the 1970s about the limits to growth to the current debate on green-house effect, genetic engineering and the gap between North and South.”

The Green Capitalists – A Report about Large Corporations and the Environment. 129 pages. Paper back. Illustrations by Robert Nyberg. Friends of the Earth, Sweden, 1998. Out of print. Pdf-copy HERE.

The Hidden Agenda of the European Union. 2000.

The Rise and Fall of Social Engineering. Liberation, India, 1995.